In the exhibition literature the Ann Wolfe writes:

‘Chris Drury investigates themes related to the environment, emphasizing cycles of destruction and regeneration in nature, and the ways that humans affect these processes. In Mushrooms | Clouds, Drury brings an international perspective to topics ranging from land and water appropriation to nuclear testing in the American West.

In many of his artworks – located inside and outside the Nevada Museum of Art galleries – Drury utilizes materials collected from such places as Pyramid Lake, Donner State Park, and the Nevada Test site to engage museum guests in the ongoing debates related to scientific, cultural, environmental, and political issues.

Why Mushrooms and Clouds?
As the primary regenerators of soil in nature, but also poisonous agents of death, mushrooms are a metaphor for the cycle of destruction and regeneration in the environment. From mushroom spore prints to a sculpture that takes the form of a nuclear mushroom cloud; a multiple video works that explore cloud-like properties of smoke and water, Drury makes visible the subtle connections between art and environment.’


Five works from my Studio: 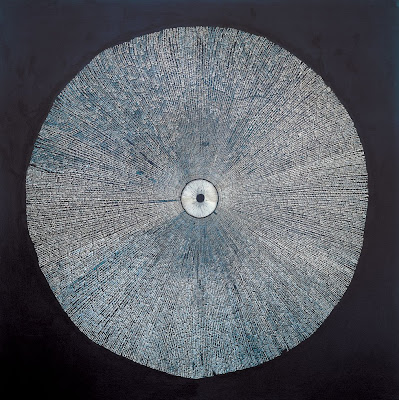 I have a continuing fascination with mushrooms and their spore prints. Up until this summer (2003) when I saw two Destroying Angels (Amanita virosa) growing in the forests of Ontario, I had never seen one. Because of this I had to use its colourful relative, Amanita muscaria for the central spore print. If you cut off the stem of a mushroom and place it on a piece of paper overnight, covered with a bowl, it will drop its spores onto the paper in the pattern of the gills. The spore print here is digitally scanned and printed in three versions and altered by changing the contrast in Photoshop. The prints are glued and ironed onto the canvas which is built up in layers of gesso to form a surface for writing.
This radiating pattern of spore lines draws you in as a mandala would, but if you take a magnifying glass and follow one line from the centre out to the periphery then you will notice that each line branches and branches again like the limb of a tree. In making these densely written works this is in fact what I do: I follow the principle of the line that branches, only in densely hand-written words, in inks of different tones, with reed pens of different thickness, gathered from the banks of the river (everything flows here) and which have to be constantly sharpened and dried. The written words are repeated and hypnotic, like a mantra. The words cease to have meaning, the concentration is on the sound. A word that has a good sound is easy to write. It flows on to the canvas. The concentration is on the sound, the shape, the size, the colour, the tone, the branches. The words are the mantra that shape the mandala.
The mushroom Amanita virosa - Destroying Angel - is pure white and utterly deadly if you are foolish enough to eat it. Symptoms of poisoning may take 24 hours to appear by which time it is too late to do anything. Severe vomiting, diarrhoea and abdominal pains may last a day or more and are then followed by a period of recovery. The patient may think his ordeal is over and may be released from hospital only to die in agony within a few days from liver and kidney failure.
The name Destroying Angel has a strange pull and I have long wanted to make a work with this mushroom. With the events of September 11th and the ensuing wars in Afghanistan and Iraq, it seemed like now was the right time. The mushroom is symbolically paradoxical: mushrooms are agents of decay, but by breaking down organic matter into soil they create the foundation of life on our planet. I like this duality; the image of a destroying angel brings to mind the fearsome sword-wielding Shinto deity, Fudo Myoo, who by cutting through the ego, liberates rather than destroys. 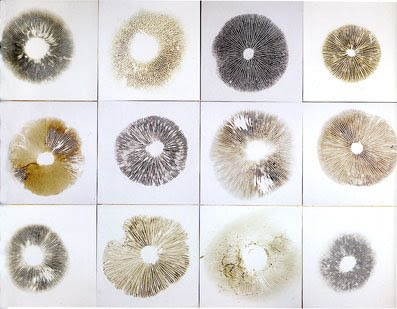 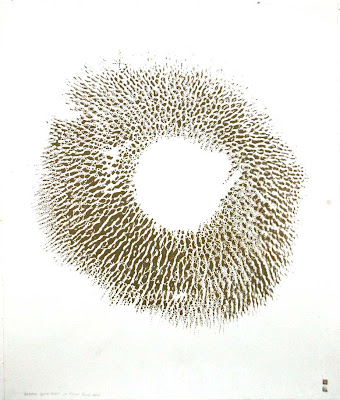 Spore Waves
A three minute looped video of a spore print projected onto a creek at night with its image mirrored on the adjoining rock wall. Waves and ripples from the water course through the image. 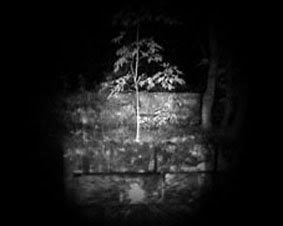